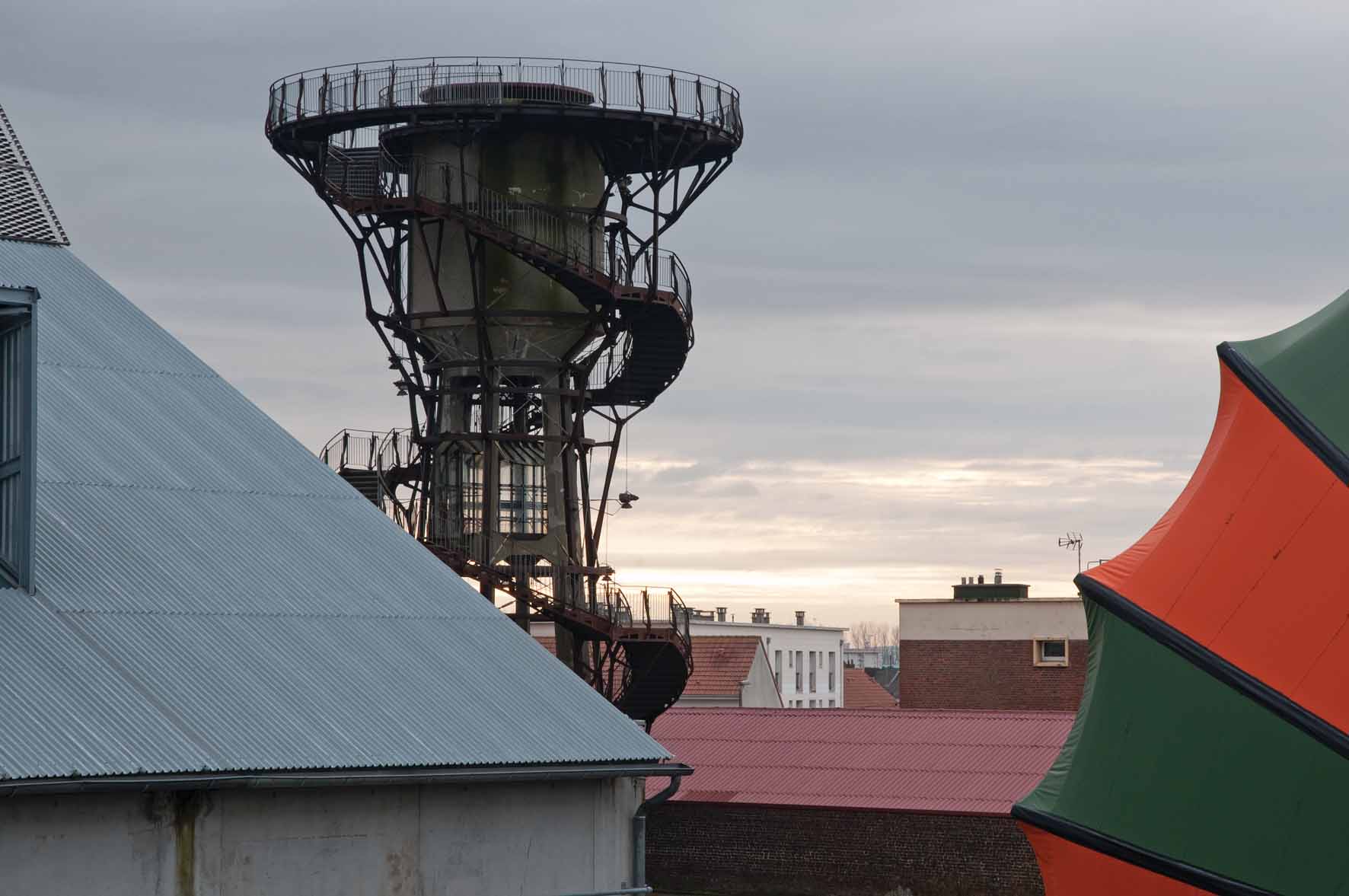 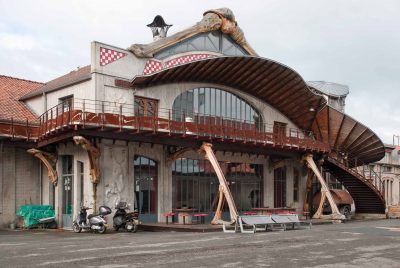 The theatre and performing arts complex of Le Channel, Scène Nationale de Calais, situated in the walled compound of the old abattoirs of South Calais, was completed by Construire (Patrick Bouchain, Loïc Julien and Chloë Bodart) in 2007. Consistent with Construire’s other cultural centre projects in decommissioned industrial buildings at Roubaix, Nantes and, most recently, La Rochelle, the Calais project involved a strategic reuse of the historic architecture toward a patchwork of adaptation, hybridization, destruction and new build. Notably, the sole building to be destroyed on the abattoir site was its concrete furnace, where the unusable remains of animal carcasses were disposed. Studio Cirque, an example of Construire’s nomadic, circus tent structures was situated on the footprint of the erased building, one of four major performance spaces created within the complex.

The Calais project also involved an additional programme of ornamentation. As part of the condition of the brief to Construire the director of Le Channel, François Peduzzi, had asked the architects to enter into collaboration with the performance production company La Machine and its director François Delaroziere, with whom Peduzzi had been collaborating during earlier phases of Le Channel’s occupation of the abattoir. (La Machine are known internationally for their animal-machine centre-pieces to urban performance.) As Peduzzi recounts, Bouchain willingly agreed to the collaboration. He understands Bouchain’s generosity here to reflect a broader concern within his practice for situations of co-authorship. Importantly for Peduzzi, this also extends to the period after project delivery. He explains how Le Channel constitutes a condition of architecture ‘non-fini’ (unfinished, open-ended) and that the community enjoys ‘infinite permission’, or ‘freedom at the point of use’, that is, to adapt the project without recourse to Bouchain’s authorial sanction. 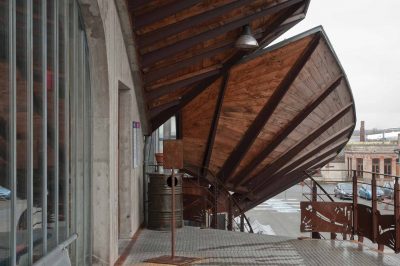 La Machine added to Construire’s architecture an ornamental art decoratif, staging, as the chief carpenter Emmanuel Bourveau explains, a fusion of the vegetal and the animal. Rendered in carved tulipwood and metal (the same materials used in their theatrical machines), these elements are present both interior and exterior, appearing in the form of physical growths or customized armatures to the buildings, and as various forms of furniture and framing within the public spaces and offices. The embellishments principally occur on the façade, balcony and interior of the main reception building, the bar, a performance space called Le Passager, and the belvedere (an adapted water tower). The presence of this bespoke ornamentation is sufficient in certain areas of the complex to dominate its aesthetic; to, in effect, assume its identity.

The programme of decorative embellishment (literally ‘over-doing’ architecture) might be said to deliberately refute, or over-write with a new ‘text’, the aesthetic conventions and expectations of contemporary architectural design. It gestures toward a popular aesthetic, establishing a kinship with earlier strategies in French design of the postmodern period, notably, artist and landscape designer Bernard Lassus’s incorporation of ‘kitsch’ or whimsical elements as an explicit gesture of solidarity with popular cultures of decoration. In the transition from the production of animate theatrical machines to architectural ornament La Machine have affected a destabilization of aesthetic categories that involves realigning their own aesthetic of urban, theatrical performance (of the kind that is commissioned to represent the cultural ambitions of major global cities), with something akin to popular elements of street decoration, the gaudier aspects of the commercial French high street, exemplified, indeed, by the bars and nightclubs of Calais’s own rue Royale. This would represent, therefore, the desire for a continuity between the public realm of the street and the thoroughfares or ‘parades’ of circulation within the compound of Le Channel, that also articulates a shift into a conception of public space as the space of performance. 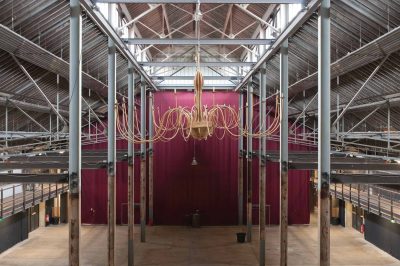 This gesture toward a ‘popular’ or ‘inclusive’ aesthetic within the work of La Machine might be productively compared to Construire’s own conception of public or collective identity with their acts of building conversion. Bouchain asserts that it is vital to maintain the immediate traces of a history of use within a converted architecture, specifically, to maintain a physical memory of the ‘previous conditions of labour’. Bouchain seeks to ensure that the current mode of production within a site, its expenditure and action, physically coexists and accumulates alongside the traces of past use. Take, for example, the performance spaces of the Grand Salle, and Grand Halle (the two halves of the original slaughterhouse in the centre of the compound) in which Construire’s work was simply to add greater height to the building and equip the space for theatrical performance. The painted and tiled surfaces of the masonry base of the original slaughterhouse are left unchanged. Those elements of the metal framework of the building that survive from the original structure remain untreated, with the grafting point of new roofing structure appearing plainly as a transition to new, matt grey paint.

The affirmation and preservation of ‘trace’, past and present, supports the conception of architecture as unfinished (‘non-fini’) and open to further adaptation. It articulates, without hierarchy, the present as part of an on-going historical process. We might consider, therefore, that the ‘popular’ ornamentation of La Machine operates precisely in support of, and is supported by, this notion of trace. It develops from the understanding of architecture as a space of accumulation, and although produced in collaborative dialogue with the architect, it equally represents a freedom within this space to go beyond the ‘sanction’ of the architect as author.

What then is the ‘text’ of this ornamentation and how does it contribute or embellish the meaning of collective identity and trace within this site? Historically, the project of Le Channel echoes a process of urban and social change that has happened many times before: the expulsion of, what Dennis Hollier has termed, ‘the unredeemable ugliness of the slaughterhouse’ to more remote locations, in favour of the ‘beauty’ of cultural consumption. With reference to the writings of Georges Bataille, Hollier depicts this process of acculturation and the denial of the visceral as one from which society never truly recovers at a symbolic level. The suppression of the bloodshed and decomposition of the slaughterhouse from mass consciousness becomes manifest as ‘a pathological need for cleanliness’, compensated for by the ‘purifying’ cultural rituals of the museum or other spaces of culture.

Focusing, in conclusion, on the tulipwood façade elements of Le Channel’s reception building, I would suggest that the production of form and ornament expresses here (or, perhaps in a more unconscious way, ‘figures’), a matter or substance of abjection. This abjectness is enforced by the carvings’ exposure to the erosive conditions of the Calais winter, as they peel, discolour and accumulate lichen. The aesthetic of the trace within architecture, the marks of past use, can all too easily be assimilated into a high art design aesthetic, and its historical authenticity neutralized. But La Machine’s façade elements stubbornly resist such assimilation; they represent a form of labour and expression that the professional architectural media struggles to validate. Moreover, this specific aspect of La Machine’s work at Le Channel potentially carries a deeper symbolism, resonating with the darker undercurrents of Hollier’s dual history of slaughter and culture. 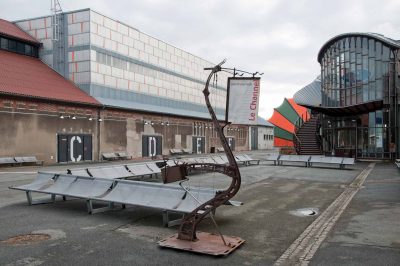 In the transition from the space of urban theatrical performance to the surface of architecture, La Machine have moved from the production of complete, mobile animal bodies, to render instead fragmented bits of animal matter stretched over architecture, like structural gristle, bone, skin and ligament. This amounts, not to an overt symbolism of a specific, animal body (absent bovine form), but a more diffuse presence of the unidentifiable remains of a deconstructed body, one rendered down by an unforgiving process of industrial butchery. This, then, is symbolic of the process of the abattoir itself, figuring no less than the unusable animal remains destined for the destroyed furnace. That sole of element of the abattoir complex to be destroyed in the conversion process returns as here as ‘trace’, ‘stain’; ornament as architectural dirt.

This text is an extract from the article, ‘Not Doing/ Overdoing: “Omission” and “Excess”‘, in Jonathan Mosley and Rachel Sara (eds) The Architecture of Transgression, Architectural Design, Nov/Dec 2013