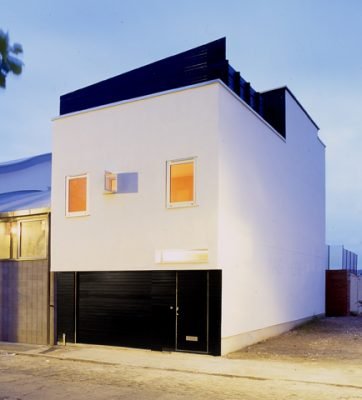 The Redcliffe area of Bristol was described by the historian Keith Brace in 1970 as ‘a place apart’. Its westernmost streets, on a sandstone promontory above the docklands, seem not to have changed much in the past 30 years, being an unusually casual mix of residential terraces, office blocks, garages and workshops, with the old General Hospital tucked away in their midst.
It is, though, soon to become more uniform and more densely occupied, as new housing developments have been approved. A number of things are likely to disappear as these gather momentum: a late 1960s office block; a dusty, empty plot, which serves as a temporary parking lot; that plot’s colony of buddleia plants; and the north elevation of 2 Alfred Place – a house recently completed by the artist/architect collaborators Sophie Warren and Jonathan Mosley.

Upon that elevation is a text which seemingly addresses this future disappearance. ‘WAS HERE’ has been painted on the lower portion of the wall – regular black lettering washed over a few times with the white paint that covers most of the exterior of the house. The text is past, future and present tense combined: structured in the past tense it implies future change and, by doing so, also draws attention to the moment and to the transitory.

To whatever degree loss might be a value in the ‘was here’ equation, it is detached from the specific nature of the changes that will occur. It is not, in other words, a judgement on the nature of the future development. It refers more to the sphere of activities surrounding the project in process, to the life of the site and its relationship with the topography of Redcliffe. Effectively, the fulfilment of ‘was here’ – the covering of the elevation – will mark the end of the house’s becoming.

Both the text and that process of design development and construction are also very much related to the art practice of Warren & Mosley. This is diverse, so far comprising performative, urban interventions and documentation to gallery-based video and model installations, involving sound and lighting. The building site effectively became an extension of their studio, hosting an unfolding dialogue on the relationship between architecture, time and the body.

Both the design and construction phase was characterised by the extensive use of scale models, from 1:200 to 1:1. These functioned as a means to gauge/study the house’s relationship to its immediate context, and as prototypes for experimental interior planes and spaces. The house represents a slow accumulation of observation and reaction to this corner of Bristol. Mosley talks of a radius of local influences and points of reference. He describes the process of incorporating these in terms of ‘reflecting back snapshots’ of the surrounding topography, so that the house becomes a composite of memories and associations.

The clearest example of the borrowing or ‘reflecting’ of an element is in the use of black timber-boarding, homage to a nearby, 19th-century boat shed. Boarding appears in the lower section of façade of the Warren & Mosley House (forming the garage and front doors), and then reappears on the top floor to form an outer fence for the roof-top garden and cabin-like cladding for the top-floor room. 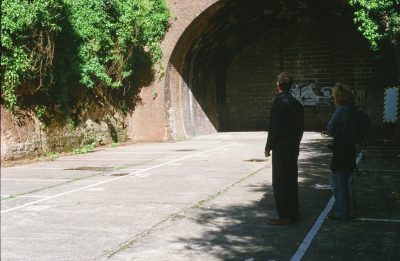 Situated at the foot of the sandstone cliffs on Redcliffe Wharf, the boat shed is some 10 metres below Alfred Place and out of sight of the house. This space is, however, of particular significance in the topographical narrative of the house’s evolution, as it is the point of entrance to the Redcliffe passages and caves. These Warren & Mosley visited during the period of site analysis, guided to the voids beneath their plot by a local caver.

The site is also subject to a much more brutal, ‘machine age’ incursion into geology. Just around the corner from Redcliffe Wharf is a railway cutting and tunnel entrance: a now abandoned link of the Bristol Harbour Line between the docklands and Temple Meads station to the east. The house sits above and to the left of the bricked-up tunnel entrance.

The appearance of the west elevation acknowledges the tunnel by way of its own dark recess, created at the very top of the building. The black, timber-clad, top-floor room is set back, so as to leave a narrow terrace between it and the rest of the west facade, with parapets on either side and a shallow overhang. This zone of shadow and black timber effectively acts compositionally to afford the house greater graphic potency and presence within its context, in counterbalance to the dark void of tunnel mouth. 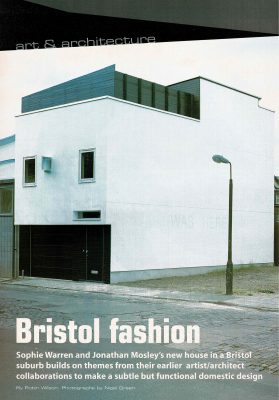 This contextual, compositional awareness of Warren & Mosley’s work is in part informed by their interest in the paintings of the American artist Edward Hopper. This particular Redcliffe scene itself is reminiscent of Hopper’s subject matter. Houses and tunnels were core and symbolically charged motifs of his later works in particular, such as Ryder’s House (1933) and Approaching a City (1946).

The way in which Warren & Mosley engage and learn from the architecture of Hopper’s paintings has less to do with the creation of iconic form than with the compositional structuring of adjacent elements within the wider visual field, and the way in which those combinatory structures often imply motion. In a short text on Hopper’s Hills, South Truro (1930), Warren comments: ‘I feel as though I am on the point of moving out of the picture along the railway line, but that motion seems frozen in time and I remain in the same place.’

Warren is recognising in the heart of the Hopper image a dynamic between presence and absence. This, we might note, finds a condensed form in the ‘was here’ text of the north elevation. Similar temporal equations occur in other Warren & Mosley art works. For example, a video loop of an arm extended at right angles to the body takes as its title a passage from Marguerite Duras’s The Atlantic Man: ‘You have remained in the state of having left. And I have made a film out of your absence.’

The formation of an image at the intersection of tenses is the purpose of one of the more unusual features of the house: a triangular-shaped mirror appendage positioned in the centre of the front facade on the first floor. This comprises a metal armature projecting out from a square aperture, with mirror glass on all internal and external surfaces. The principle internal mirror is mounted at 45°, and immaculately replaces the scene that would otherwise be the east-facing view across the street, with a north-facing one down the street, to the open vista onto the Bristol docklands and beyond. 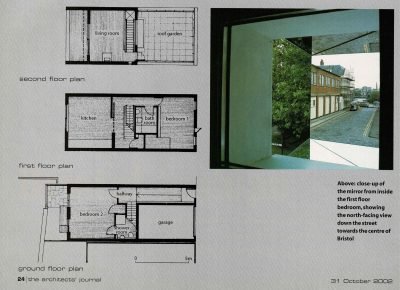 The structure is reminiscent of the internal mirror mechanism of a camera, creating the suggestion that the house itself is a recording device or viewing machine, its lens /shutter always open, constantly exposing its interior to, what Warren conceives of as something redolent of the past tense of the photographic image. Warren writes: ‘The view of the street reflected in the mirror objectifies an experience you have just had – the physical experience of walking through the city is now experienced as a purely visual one, where time appears rooted in the past and seamless.’

Of course, the mirror image also captures movement and incident. Yet, this too seems uncannily displaced and distant, producing a filmic or dreamlike effect of watching events from an unspecified moment in the recent past, unfolding and keeping pace with the present.
The wall directly opposite the aperture within the room is inclined, sloping backwards at 79°, implying a reclining figure. This intensifies the analogy with the camera apparatus, proposing a relationship between the total volume of the room and the mirror aperture. Moreover, it recalls that antecedent of the photographic machine, the camera obscura, as a room into which a viewer had to enter in order to contemplate the image.

This is one of two inclined walls in the house, the other being in the passageway from the front door, which slopes outward at 87°. These angles were determined by eye with the use of full-scale plywood prototypes. Their original purpose was to mediate between interior tectonics and the moving figure by way of increasing the volume of space at the level of the head and upper body – the space of thought, perception and gesture.

As well as the angled, left-side wall, the ground floor also has a ramped floor, sloping upwards from the door at a subtle gradient of 4°. Here, the notion of tense could be said to shift to become one of speed, a concern explored by Warren & Mosley during the production of a previous body of work on the environments of motorways and service stations, entitled M5 Southbound: Welcome Break.

The ramp slowly begins the process of ascent through the house and leads to a narrow, central stairwell. This space of movement at the core of the house is also intended to mediate between its two halves. In particular, it addresses the influence of the two contrasting zones of implied speed which make-up the front and rear exterior prospects: to the west, the ‘fast perspective’ of the railway cutting, as Mosley puts it; to the east, the pedestrian and back-street traffic speeds of Alfred Place. The stairwell is a means of spatial and acoustic communication between the different volumes of the house, but which also contributes to the staggering and reorientation of space between the front and back, absorbing the visual impact of the railway vista as it powers its way beneath the westerly windows. 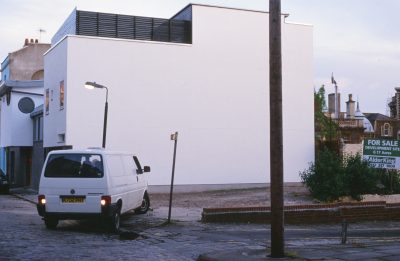 Number 2 Alfred Place; a modest address for the death of the distinction between art and architecture. (May the commissioners of the public art programmes in the public spaces of the Bristol docklands take note.) But amid all the subtlety of Warren & Mosley’s spatial and perceptual experiments, we should not lose sight of the fact that the house also performs as a practical, functional pocket of contemporary, domestic design; a genuine piece of urban hardware. It achieves this with an unassuming ease and assuredness whilst articulating its precise dialogue with context, poised between the past, present and future of this urban ‘place apart’.