Review of the Open and Shut House by Toh Shimazaki Architecture 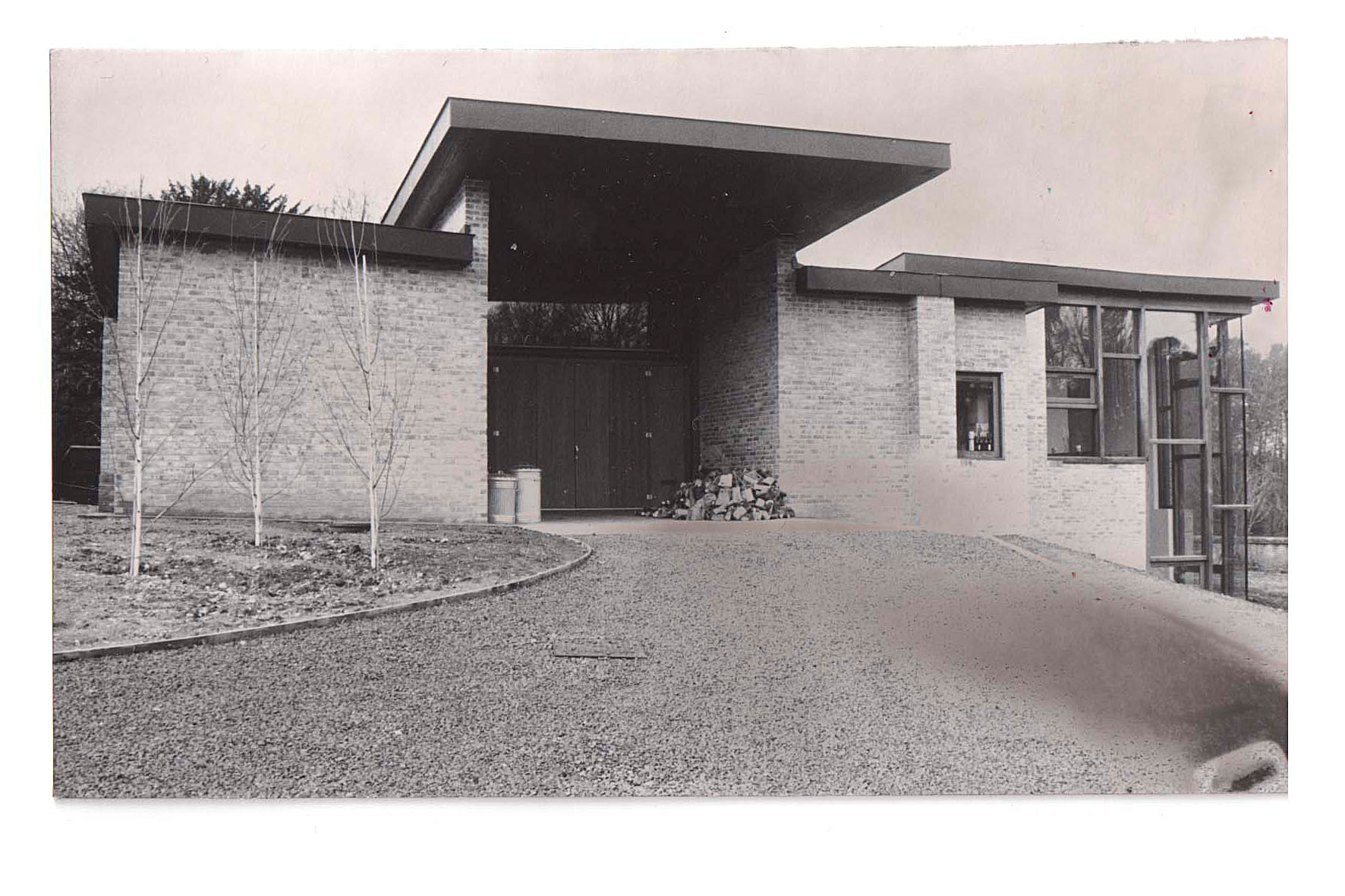 NOT JUST AN ENTRANCE TO THE HOUSE BUT AN

ENTRANCE TO THE LANDSCAPE ITSELF ¹ 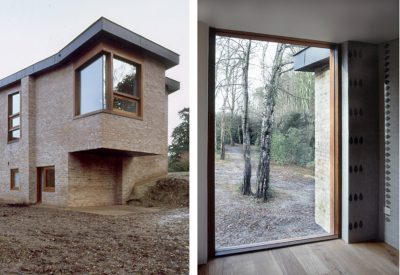 Parkhurst House, a residence for two London lawyers and their family, sits near Dorking in the lightly inhabited landscape of Surrey’s ‘area of outstanding natural beauty’; a working landscape, a landscape of privilege. The noise of the M25 corridor carries, but faintly, like background static. The project was code-named the Open and Shut house (abbreviated to ‘OSh’) by Toh Shimazaki Architecture – partly in reference to its status as a country retreat that would, at least initially, see intermittent use.

This project continues a decade-long association between the clients and this London-based firm, which previously included the construction of a small guesthouse neatly slotted into the back garden of the lawyers’ London home. The OSh project was, by contrast, defined by an abundance of available space and site potential. The task then was to establish priorities, even constraints, within an embarrassment of landscape riches.

OSh continues a history of development on the Parkhurst site that goes back to the mid-17th century. The new house replaces an unremarkable 1970s villa, which replaced an 18th century manor house with 19th century additions. Demolition of the 1970s building was completed in mid-phase of site work for, in admirable attention to thrift, material from it was carefully salvaged and incorporated into the construction of sheds in the grounds, as well as providing floorboards for sections of OSh itself.

The first view of OSh from the driveway to the east is across the upper section of a small valley, terraced into a stepped series of formal gardens. There is something quite peculiar, even uncanny, about the scene of the new house and surrounding landscape that is a little hard to pin down.

Clearly, the eastern ‘frontage’, with its oversized features – the cavernous main entrance, huge corner window, and bold rhythm of surface and depth – hardly conforms to expectations of the modern English country house. But what is most surprising about this scene has something to do with a gesture the building makes towards the landscape. The oversized ‘front door’, created by the projection of a section of the inverted pitched roof, appears not simply as the entrance to the house but as the entrance to the landscape itself. This deep recess seems equally to be a portal into the woodland that forms the backdrop to the scene. 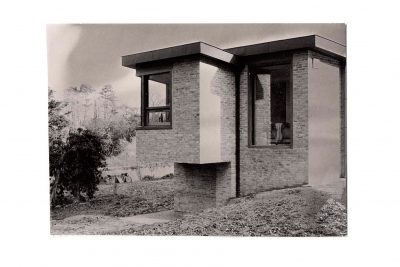 The entrance expresses a desire not just to acknowledge the landscape, but to embed the new house in its topography, in dynamic response to the north-south height-rise in the terrain. An extensive array of topographic models, montage and sketch drawings by the architect testifies to this, setting the project apart from much building in the UK in its meticulous reading of the landscape context.

Chief among the conceptual cues found within the existing landscape was the brick perimeter wall of the property’s northern edge. This follows the line of a footpath and runs east-west in parallel to the house. Initially, the architect thought to attach the new house directly to the wall – a gesture reminiscent of Alison and Peter Smithson’s Solar Pavilion in Wiltshire (1962). Planning guidelines prohibited the house being visible from the footpath, so it retreated some 10 metres to the south. However, the material influence of the wall remains, in the choice of brick as primary masonry component and in the presence of structural piers on the facade, which introduce a vertical rhythm and relief.

The interior of the house also responds to the landscape feature of wall and footpath. Central to the organisation of the lower section of the house is what the architect calls the ‘canyon’ – the building’s only corridor, which runs east-west at ground level, connecting four bedrooms and a games room. Indeed, the canyon is partly subterranean, its southern wall cut into the terrain at a depth that allows the bedroom windows on the northern facade to meet the ground. Occupants ‘descend to the ground to sleep’, says Takero Shimazaki.

This preoccupation with the ground, the impulse to carve into the land to produce living space, radically departs from the known architectural history of the site, but it intriguingly echoes the disposition of a nearby archaeological artefact. Approximately a mile distant from OSh at Abinger Manor is a ‘pit dwelling’, dating from 4,000 BC. 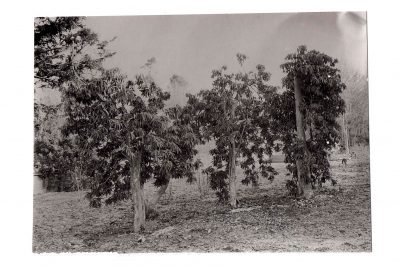 In addition to the footpath, the architect also cites the influence of the road journey to the house. The route from Dorking station became the project’s extended site and further source of contextual inspiration. Once one leaves the A25, the route to the house is distinctly a journey into a landscape, beneath woodland canopies, roadside thickets, the bare roots of coppice wood banks, and the exposed geology of a section of road called ‘Hollow Lane’. In this sense, OSh and its cave-like eastern entrance is intended to be both a destination and a continuation of the landscape journey.

How, then, does that journey into the landscape continue? What mode of habitation does the house promote? A key notion was that it should be, as Yuli Toh says, ‘incidental’ in the landscape. The ambition was for a house that does not simply demonstrate a designed connectedness to the landscape, but also incorporates contingency and happy accident in its relationship to its site.

Permeability is a dominant principle at work in the quest for an ‘incidental’ mode of habitation, encouraged through the design of the outer skin of OSh and its interior arrangements. The architect has largely dispensed with interior corridors in favour of a staggered series of volumes. Drawings reveal that the new house comprises a series of strips of building, like a staggered arrangement of geological strata, running in parallel to the contours of the land.

The divisions produce five principal volumes on the top level, which contain, from south to north, a guest bedroom and bathroom, the entrance lobby and dining room, the kitchen, and then the living room, which leads on to the master bedroom and small office at the extreme north-west corner of the house. (The lower-level bedrooms and games room lie beneath the living room and master bedroom.) The strip-like plan allows for extensive permeability across the interior while preserving a diversity of overlapping spaces, and creates a sheltered sun-trap outside for the terrace and poolside area on the south-west side. 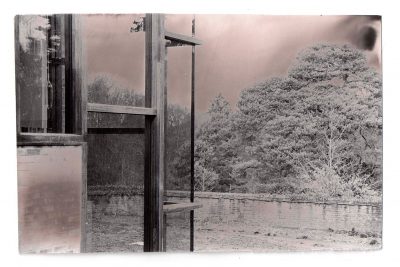 All facades of OSh are extensively perforated, and here again aspects of the Smithsons’ work would seem to be influential: specifically, the fenestration of the Sugden House (1956), and the more elaborate Hexenhaus pavilion and porch frameworks, which the Smithsons called ‘lattices’.

The north facade of OSh is particularly dense with the thick iroko wood window framing – an African hardwood favoured by the architects for its warm, ‘roasted’ colour. It supports no less than three corner windows: one at both ends, and a third at the articulation between the living room and master bedroom. The interior thus promotes through permeability a ready connection (aural or visual) between the occupants of its interior, as well as constant visual connections to the landscape, with a multitude of framed views, and views within views.

Not surprisingly, life at OSh is at present largely founded on a leisured enjoyment of the landscape. The journey to the house concludes in a carefully crafted vantage point onto Surrey’s ‘outstanding beauty’ as view and backdrop to family life.

At the time of this documentation, the grounds were an intriguing mix of the tail-end of site process and the beginning of a new regime of gardening: bare sculpted earth at the margins of the house; a huge wood pile towards the western perimeter where the remains of cleared shrubs and trees rot among debris from old and new houses; and the property’s stock of mature rhododendrons mercilessly pruned and appearing unfamiliarly menacing. Early evidence of new planting suggests just a decorative approach to gardening at this stage, although there are future plans to revive a kitchen garden and develop an orchard.

The ‘oversized’ eastern entrance, that ‘uncanny’ gaping hole in the house-in-landscape scene, is for me a question mark concerning an as yet unresolved set of relationships between the building and the landscape. How might this house function as a platform for permanent dwelling, not simply a weekend retreat? Might it evolve toward an ‘incidental’ life based on the productivity of the wider landscape, not simply its ‘beauty’? As an 18th-century map of the surroundings reveals, the woods that the house’s iroko frames ‘borrow’ for the interior were once active coppice and pasture woods, essential resources of a local economy. 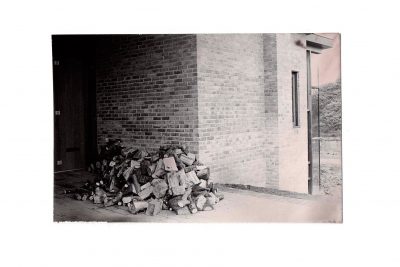 These concerns for landscape process and productivity may seem marginal given the source of wealth behind the scheme – a City-based law practice. However, as the history of Edwin Lutyens’s nearby Goddards (1900) reminds us, bespoke country residences can often undergo a surprising change of programme. While Goddards became a private family residence in 1910, it was originally conceived as a communal ‘rest home’ for professional London women of ‘small means’. And famously, Le Corbusier’s Villa Savoye, Poissy (1929-31) shifted between private and communal usage, becoming a youth centre before falling into ruin.

With its strip plan without corridors, and the extensive apertures in its structural masonry, OSh seems above all to be highly adaptable. One can imagine, for instance, a partitioning of its volumes into attached ‘cottages’, or see how its lower bedrooms might convert into utility spaces with immediate access to the northern grounds – storage, workshops, even small livestock pens.

In this structural openness to adaptation, as well as its fusion with the topography, OSh seems to be designed for longevity. Its ‘journey into the landscape’, the ‘incident’ of its future life, may well be taken-on by generations with quite different needs, circumstances and desires.

[1.] The stand-first title was provided by the commissioning editor Andrew Mead.