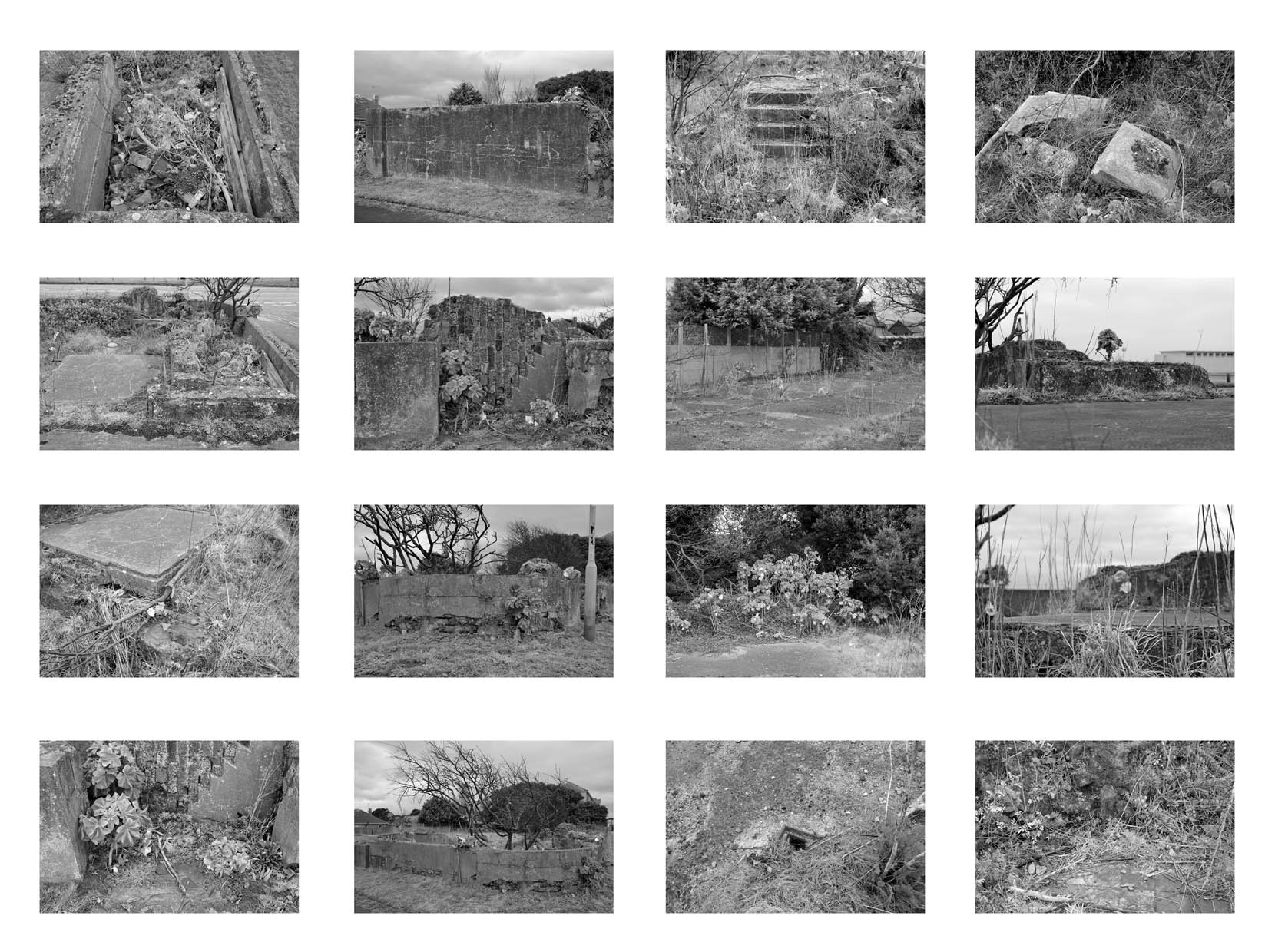 When you walk along Hastings’ seafront towards St Leonards you come across a series of eye-catching concrete shelters. Enabling people to wait for a bus on one side or contemplate the sea on the other, they deftly reconcile a change in levels, for the road is several feet lower than the promenade but the shelter’s roof stays flat. Three semi-circular bastions draw you towards the beach and supply a panorama of waves polishing the pebbles and eroding the coast. But when you look back inland from these bastions you see another aspect of the promenade, another level: a long walkway running underneath it, decorated with myriad fragments of glass. The whole design is unusually sophisticated for 1930s Britain and you start to wonder who the instigator was – someone, presumably, whose ambitions were not just architectural but civic, and who had more time for Modernist ideas than most of his contemporaries.

In fact there was such a person and his name was Sidney Little. From 1926 to 1949 Little was Borough Engineer and Water Engineer, and his bold schemes led Hastings to bill itself as ‘The 1066 Town with the 1966 Outlook’. Little was known locally as ‘The Concrete King’ for his embrace of this material beloved by the inter-war avant-garde. Some of his works survive: this seafront promenade, for instance, nicknamed Bottle Alley, and the reservoirs that he built inland to supply Hastings with water. But another major project – the Bathing Pool at St Leonards – was later demolished, and his vision of a split-level town centre, with pedestrians above and traffic below, remained a dream. It can be glimpsed in a 1946 film, A Peep into the Future, that plays in Hastings Museum – a peep into a future that never came.

Little’s work and ambitions are central to Photolanguage’s project in East Sussex Modern, but have fostered a more diffuse exploration of East Sussex in the spirit of their previous collaborations. Photolanguage have a special interest in the fate of Modernist architecture, as in their very first project, investigating the post-war reconstruction of Calais; but they are drawn to landscape as well as to architecture and have a keen eye for what is usually overlooked. Reflecting this concern with both the built and the botanical, it’s no surprise that they appreciate those marginal areas where the boundary between construction and nature is blurred; or patches of wasteland where plant life slowly erases the traces of former use.

Photolanguage spend a lot of time on field trips but also in archives, and you never know quite what to expect from their exhibitions. Among the images they feature, you are as likely to find an umbellifer sprouting on a stony beach as a Modernist flat roof or stark facade. The photographs may vary in size and in manner, sometimes redolent of earlier conventions of picturing the world. Meanwhile, assembled alongside them in vitrines, there may be texts and objets trouvés. Together with the images they form an ensemble that invariably intrigues, but demands thoughtful scrutiny to disclose its implications.

Some comparisons from photography, painting and poetry can put Photolanguage’s work in context but also show the distinctiveness of this present project. One key reference is the New Topographics photography of the 1970s, which brought a new approach to depicting landscape and the ways in which humans shape it. A dominant earlier aesthetic was encapsulated by Ansel Adams in his immaculate images of American National Parks – adroitly framed to sustain the illusion of untouched wilderness. Such idealisation was alien to New Topographics photographers like Lewis Baltz, who sought a more inclusive vision of late 20th century landscape. At the same time, Baltz challenged the conventions of architectural photography: the tendency (still too conspicuous today) for magazines only to feature buildings at the point of completion – unoccupied, glamorised, in the very best light. If architecture periodicals still resist the New Topographics approach, a glance at the photography shelves in a well-stocked bookshop will show how widespread its influence has been.

‘I wanted it to appear as though the camera was seeing by itself,’ says Baltz. One of his most striking works, Candlestick Point, was shot over several years on a landfill site near San Francisco: a chaos of shattered masonry, car tires, timber, plastic and plant life. The final 84 photographs, some in colour but most in black and white, are grouped on the wall in a grid, but with spaces in-between some of them as if the project could be consolidated. ‘Only the whole piece is the work…Just a continuous flow of images that need to be seen in their totality to be fully comprehensible,’ adds Baltz.

During the years that Baltz was taking his photos in the American West, the artist Prunella Clough was making paintings with such titles as Disused Land, Overgrown, and Wire and Demolition – many of them stemming from her walks around neglected bits of London. ‘I see my subject largely as landscape…I can locate all the ingredients of a painting in the richness of the outside world, the world of perception,’ said Clough, expressing a preference for ‘the urban or industrial scene or any unconsidered piece of ground’. When Clough was on her London walks, she often came across an object that held her attention, as titles such as Plastic Bag and Perforated Fragment attest. Her gaze oscillated between the close-up detail and the wider scene.

The urban margins that Clough loved to frequent have been a stimulus for many poets. Roy Fisher’s poems often depict the post-war landscape of Birmingham and the Black Country, reflecting its industrial decline, its vistas of decay and demolition, its sites in abeyance awaiting a future. Sean O’Brien investigates similar terrain, describing in one poem some former railway lands where ‘One rail vanishes, then both are imprints / And next silver birches advance’; while in this new vacancy there is ‘No-one to see the place become /Itself now that the meaning is gone.’

Two of O’Brien’s younger contemporaries, Paul Farley and Michael Symmons Roberts, recently co-wrote a book called Edgelands, defining them in brief chapters with such headings as Landfill, Wasteland, Ruins, Woodlands and Canals. They see these edgelands as ‘places of possibility, mystery and beauty’, perpetually in a state of transition but offering ‘a collage of time’. In the course of the book they cite numerous poets who appropriate the edgelands in diverse ways. Such terrain can serve a poet to represent a state of mind, a state of soul, even a more general state of culture. It can dramatise industrial decline or be the locus for a meditation on ruins and the passing of time, with melancholy saturating every line. Or it can simply be the object of a sensuous description as the poet looks intently at what’s there, perhaps finding unexpected sources of delight and conveying them to the reader.

Together these examples from photography, painting and poetry might sketch the cultural context in which Photolanguage operate: a more general interest in what Clough called ‘unconsidered ground’. But along with some affinities, when we turn to their present exhibition some differences also are plain.

Photolanguage’s starting point, unpredictably, was the sunken garden on Hastings seafront opposite Debenhams. With its concrete shelter, its variegated botany, its play with different levels, and its place in a larger civic strategy, it neatly summarises a number of their concerns. The sunken garden, for instance, recurs in this exhibition, reflecting a fusion of the planned and the fortuitous in their practice. Knowing that Little was involved in the wartime construction of Mulberry Harbours – mobile structures used in the D-Day landings – they followed the coast road to Littlestone where parts of one such harbour still float offshore. They duly took some photos of it but, as a bonus, discovered too the site of a demolished house, now much like another sunken garden, with walls little more than a diagram, some steps leading nowhere, and abundant plants.

Some of the images from this and their other research trips look quite similar to New Topographics work, but Photolanguage have a different agenda. Despite Baltz’s professed objectivity, his Candlestick Point photos look like evidence for the prosecution in a court convened by ecologists – Photolanguage don’t share this critical intent. Nor are they committed just to ‘objectivity’ in their depictions. As the name Photolanguage implies, they are keenly aware of conflicting ways in which the world has been mediated by photographs, and may manipulate their images accordingly. So in this current exhibition, by courtesy of Photoshop one of the seafront shelters is hauntingly transposed into a sylvan setting, the amalgam given extra resonance by being treated to recall Pictorialist photography of the early 20th century.

What Photolanguage do share is Baltz’s belief that ‘only the entire piece is the work’, though in their case the exhibits aren’t only on the walls but form a 3D installation, comprising objects as well as photos. Some of these objects have been found on the kind of sites that Clough enjoyed (just like her, Photolanguage move easily from panorama to close-up), and could well have triggered one of her works. But in Clough’s paintings, the recognisable object is usually isolated, placed in an abstract space whose texture may suggest wasteland or ‘unconsidered ground’ – and each painting stands alone. Whereas in Photolanguage’s exhibitions the single object is generally absorbed into a larger constellation of objects and images, gaining significance from these inter-relationships.

Like Clough, Photolanguage often focus on a fragment, the remains of something, maybe cryptic: some oblong slabs on an old air defence site that recall the Minimalist sculptures of Carl Andre but command a floor of foliage not a gallery’s concrete or oak. A water tank in woodland also has a Minimalist character (shades of Donald Judd), but isn’t this scene also reminiscent of Poussin’s famous painting, Et in Arcadia Ego, with its shepherds contemplating an Arcadian tomb? In this same memorialising vein, perhaps the twin boundary markers in another photo might bring to mind antique stelae; but the work as a whole is free from melancholy. Instead of lamenting a lost past (or a lost future), Photolanguage prefer to look creatively at things as they are. In this respect, they most resemble those poets who try to see objects clearly and cultivate a sensuous precision in their lines; and Photolanguage exploit the poets’ freedom to place items side-by-side without stressing the connections (as prose writers normally must do).

Their work isn’t didactic, with an unequivocal meaning, but open-ended. They invite us to engage with it and make our own sense of it – and, by extension, bring the same imagination to bear on sites elsewhere. We might remember Robert Smithson’s well-known essay, ‘A Tour of the Monuments of Passaic, New Jersey’, where Smithson treats this charmless conurbation as a modern Rome, its ‘monuments’ comprising a bridge, a derrick, a parking lot, some concrete abutments. Smithson supplies a highly subjective ‘take’ on all these sites – it’s a tour like no-one else’s, transfiguring the mundane – and it’s this kind of personal response that Photolanguage happily encourage.

In the fusion of document and fiction that they promote, Sidney Little’s vision for East Sussex – built, lost, unrealised – provokes a broader reappraisal of our surroundings. Landscape (townscape too) is always in flux, as the spectacle of erosion from Hastings’ seafront reminds us, but our ways of perceiving it can be far too fixed. As with their previous collaborations, from Calais to Copenhagen, Photolanguage show that this needn’t be the case. Their work can question our habitual response and frame the world anew.

Andrew Mead is a long-standing contributor to The Architect’s Journal and The Architectural Review. He writes on architecture, landscape and art.